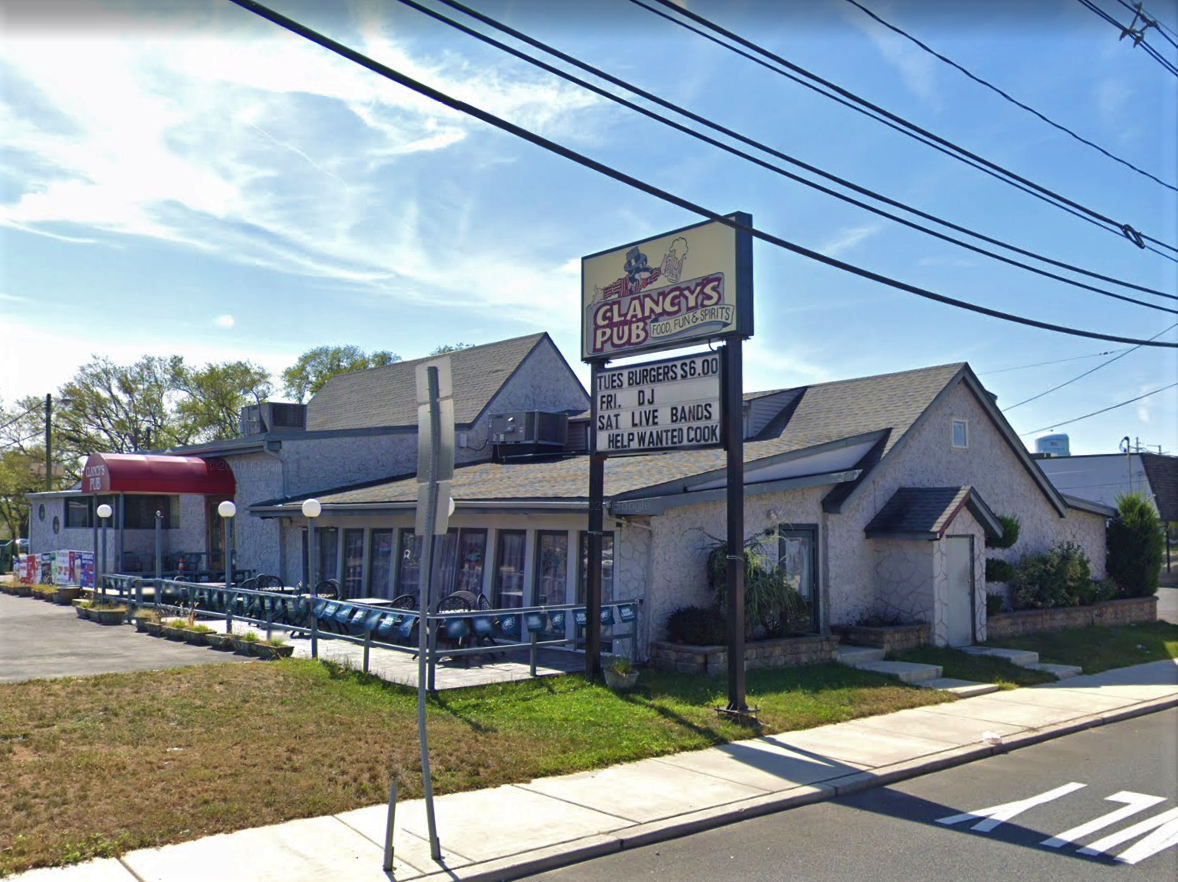 Empire Sports Bar & Grill takes over ownership of Clancy’s Pub in Brooklawn. Second restaurant for the owner of Empire Diner

Empire Sports Bar & Grill arrives at the Clancy’s Pub property in Brooklawn, NJ. The new owner of the property is Derviş Aktürk of Empire Diner and he will continue to operate both restaurants, offering a different menu and experience at the two restaurants very close by. We spoke to Derviş on Sunday evening and he shared some of his exciting plans for the property!

Owner Derviş tells us that he plans to reopen the bar and restaurant as soon as all final approvals are complete, and that he will then work on his renovation and expansion plans. In the first design wish list are a sports bar, an upgraded restaurant, a larger outdoor patio and… a new build dance club area!

The Empire Sports Bar & Grill will be located at 304 Crescent Boulevard (The Old Clancy’s Pub), which is at the intersection of busy Route 130 and the upgraded Old Salem Road intersection and traffic light. Old Salem Road became a much busier road after the state removed “Creek Road to Brooklawn Circle” access.

And yes, if you didn’t know, Clancy’s Brooklawn store closed a few weeks ago. Clancy’s still operates its full bar at Somers Point and its seasonal Ocean City Boardwalk location.

With the success of the Empire Dining at Brooklawn Circle, owner Derviş was looking for other opportunities to expand his… Empire!

While he’s shared a story or two of other properties he’s looked at, it’s Clancy’s that makes the most sense to him.

He tells us he walked into Clancy’s one day not so long ago, checked out the facility and thought about what he would do to improve it if he owned it. .

And simply asked “is the owner available?” “

Shortly after a deal was made… and plans were put in place for Empire Sports Bar & Grill.

FIRST reopening mainly as is

Derviş has big plans for the property which include a bigger outdoor terrace and more entertainment space! More on this in a few.

But those plans and approvals are going to take a while to come together, so it will first reopen Clancy’s mainly as before, while adding additional exterior lighting to the building’s main entrance to brighten things up.

This smooth opening trial will also allow him to familiarize himself with the building and the kitchen as he finalizes the menu and plans what he wants his new restaurant to become!

Derviş is very anxious to reopen the old Clancy’s bar and restaurant, and it seems the last big hurdle remaining is city and state approval of the alcohol license transfer, which is underway.

Derviş has big plans for the property. In fact, it will be three dining and entertainment experiences under one roof! Four if you count a larger terrace as a different experience!

He has a budget for upgrades that is substantial. Everything will either be “refreshed” or all new additions to the build!

Currently, the interior of the building has two defined sections. When you enter the building, to the left is the large bar and to the right at the bottom of 2 steps is the restaurant part.

And I know what everyone who’s been to Clancy’s Brooklawn is wondering… what about the TV wall?

Derviş tells us that the wall of televisions will remain!

It really is a cool and unique feature of the bar. And from what I remember on my last visit, the TVs have been upgraded to new flat screen models!

No other bar in South Jersey has a TV setup like this! I forget the count but its two horizontal rows of televisions… maybe 14 or more?

For sports days like NFL Sundays, this allows patrons to follow all the action from across the NFL!

The restaurant serving will remain on the right, and as previously mentioned, Derviş plans to offer a completely different dining experience to set itself apart from its successful Empire Diner.

… A brick oven will be added for wood-fired pizzas and other delicious offerings!

Currently, Clancy’s property has a small outdoor patio, and Derviş hopes to make one larger dining room on the outdoor terrace. The current patio is small and I don’t think it’s used a lot by customers so a bigger and more inviting outdoor space could be a big draw.

And the most important upgrade for Empire Sports Bar & Grill?

The new owner wants to add a Dance club on the second floor!

Currently there is a small private office on the second floor above the restaurant. Derviş would like to clean up most of this second floor and rebuild it with a high-end dance club.

Its goal is to make the club a place where people dress up to go out… like they did back then, and still do in European nightclubs, or clubs in places like Miami!

It’s obviously the biggest change on Empire Sports Bar’s wishlist, and it probably has the longest design time requirements.

And now you understand even better why Derviş chose to reopen the bar and restaurant for the most part as it is, as he plans the upgrades, approvals and construction.

And if you have any doubts about these ambitious plans, you must consider the incredible transformation that has taken place at Empire Diner!

With all the mentions of his first restaurant the Empire Diner, I thought we would end with some information on the diner!

If you haven’t been to Empire Diner, you really need to check out the place.

In 2015, the old Brooklawn Diner reopened with an incredible remodel of the building… inside and out.

It’s a modern design with that old-fashioned restaurant aesthetic.

Inside and out, it is bright, colorful and inviting.

At the end of 2019, the restaurant was renamed Empire Diner. I believe that at that time Derviş became the sole owner of the restaurant and the name was changed to put its mark on the business.

Oh and most importantly, the food at Empire Diner is amazing!

Derviş tells us he hopes to bring 24-hour operations back to Empire Diner soon!

And as an added bonus, there have been a few “feel-good” stories coming out of the Diner Empire.

Last August alone, Derviş and the dinner made news across the world when he saved the life of a choking client. Derviş tells us it was something he did just as a good person. One of his loyal customers reached out to local media who contacted him for a story and a security camera video… and with that, the story went viral!

The humanitarian mentality must be in the air of the Empire Diner because in 2020, two clients… a Couple from New Jersey .. overturned a car to their favorite waitress! The couple told WPVI6 “She’s our favorite person!”

One dead in overnight shooting at Omaha sports bar

Here is an overview of the cocktail bar