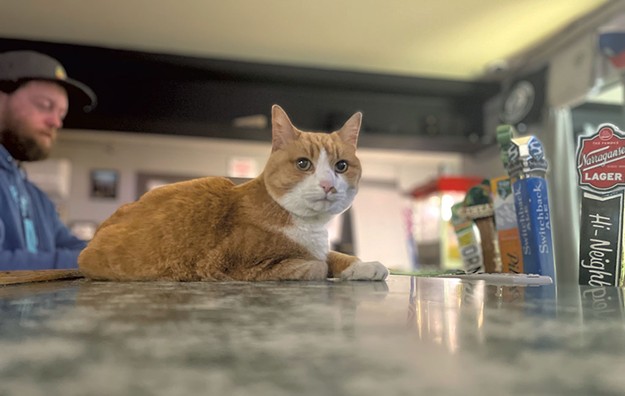 “You’re not from here, are you?” My questioner, sporting a sterling silver grill and a cluster of stick and poke face tattoos, wasn’t entirely wrong. I mean, technically my house was only four miles away, which should qualify as “here”. But maybe he was on something spiritually?

It was my third solo dive bar assignment in as many days, and I was just beginning to calm down, my otherness seemingly palpable. This adventure began when I stumbled upon a humble bar in Colchester for lunch earlier in the week and was immediately won over by the atmosphere – friendly, approachable and disarmingly regular. Although I’m a relentless explorer of a lot of things in Vermont, the neighborhood bar scene just wasn’t my groove. But after 20 minutes of easy bullshit with my new tattooed buddy, the way forward was clear: Green Mountain dive bar crawl, here we are.

Thus was born a new series, “Deep Dives”. The goal: to explore weird and wonderful local watering holes in the Green Mountains, meet the people who populate both sides of the bar, and, perhaps, figure out what makes a dive bar a dive bar of any kind. way.

Hoping to go beyond the nights of the Burlington area that I already knew quite well (Esox, the Other Place, the Old Post, the Olde Northender Pub, T. Rugg’s Tavern), I called my homie Johnny, a famous man of the people, and asked me where I could find a quirky authentic dive bar.

“Oh man, last stop at Winooski,” he replied. “They have a cat that lives on the bar.”

the Last Stop Sports Bar has had many lives as a local pub, starting in the 1950s in only half the space it currently occupies. It eventually morphed into the Trackside Tavern, which took over the building next door and gained a reputation as a good place to get less than legal substances. New ownership in 2011 spawned CK’s Sports Bar, and while the name above the door may have changed, regulars served as ballast.

That brings us to the current incarnation, established in 2017 by Shannon Garrett and Shayla Ruland, whose brother-in-law was a former owner of CK’s. Garrett and Ruland were both working at CK’s when an opportunity arose to buy the place.

“I immediately called her and said, ‘Well, why don’t we? Like, we’ve kind of already done that,'” Ruland recalled. They renamed the bar after a Dave Matthews song, raised the rugs (!), and gave the place what Ruland called “a woman’s touch.”

Located a few blocks from the Winooski Freeway Mall – aka the roundabout – the Last Stop is tucked unassumingly in the middle of a residential neighborhood, “a sus bar across the tracks”, has explained a regular. In many ways, it looks like something straight out of Dive Bar Monthly: pool table, popcorn machine, customer photos on the walls, phone booth-sized bathrooms oozing with funk and of graffiti scars.

Things get a little more personalized with drink combos like the Dew Bomb (Mountain Dew and Absolut Pears, obviously) and a giant Connect Four game. But perhaps the bar’s most notable feature is the ubiquitous presence of the aforementioned bar cat, Kitty Kitty.

“She usually picks one round a night, and it looks like it’s you,” bartender Andy James Scafidi joked as the cat settled into my mate’s lap. The eyes were closed (the cat’s, not my buddy’s) and, just like that, a friendship was formed. Magic.

Kitty Kitty “came with the bar”, according to Ruland, and deservedly has the run of the place.

“When the bar changed hands, I got more emails, texts, phone calls about Kitty Kitty than about the bar,” Ruland said. “‘Is Kitty Kitty okay? Is she staying? Does she need a home?’ And I’m like, ‘No, she’s staying.'”

The cat is a sweet and welcoming touch – a fuzzy animal wandering through a sea of ​​half-empty glasses and beer bottles in search of the perfect human to claim for the evening. I’m sure there’s a metaphor somewhere.

Scafidi is also a journey. He’s instantly likable and obviously in tune with his role as the unofficial cruise director. I have a theory that the vibe of a dive bar emanates from the energy of its bartenders, and that particular source of energy is bright, hospitable, and enveloped in a layer of sweet snark and intelligence from street.

I was a little nervous to drop the word “diving” when speaking with Ruland, but she embraces the association.

“I actually love the term ‘dive bar,'” she said. “I think it’s great. I think there’s something, like, nostalgia about it.”

“It’s like a fucking college recreation center or something,” Scafidi added. “A home base, somewhere you go when you’ve got nowhere to go. And a lot of people, you know, don’t have a place to go. That’s what a bar is. dive.”

When I press Scafidi and Ruland to define what differentiates the Last Stop from other dives, two words keep coming up: family and community.

“It’s not a bar for me, it’s more of a family situation,” Ruland said. “We all care about each other.”

Over the years, the Last Stop has opened for Thanksgiving dinners for Unhoused Benefits and Angel Tree at Christmas. He runs dog adoption events and hosts a charity golf tournament, donates annually to Pride Week, and sponsors the men’s and women’s Burlington Rugby Football Club, which I seem to find scrumbling most often.

“It wasn’t ‘Let’s open a bar and run a bar’; it was like, ‘Let’s do something for the people we met here; let’s give back to the community,” Ruland explained. “And that’s a good thing, a great place to do that.”

The best dive bars function as social anchors. These are lounges, therapist offices, billiard rooms and secure spaces. It’s what sociologist Ray Oldenburg considers a “third place”, a place where people spend most of their time after home (first place) and work (second place).

Third places are often essential parts of a neighborhood and are as important as a person’s home or job. The creation and preservation of these spaces is not accidental. Similar to other large public institutions, they are the result of careful attention and respect for their clients.

Not to say the Last Stop is all Marcel Proust and Noam Chomsky – it’s a dive bar, after all. There are occasional brawls and a dozen scoundrels who were definitely eighty-six. But, at the end of the day, the Last Stop is a home away from home, a playful, non-hierarchical joint you roll into for a $3.50 pint of Bud Light and an easy chat with the guy sitting at side of you.

When asked if he had any secret tricks to controlling a room, Scafidi offered this wisdom: “If there’s a fight about to happen, I won’t play the game. Rocky theme song. But when people start dancing, put on ‘Regulate’ by Warren G. That’s the song. Pump it up, put on ‘Regulate’ and bingo bango, you’ve got a fucking dance party!”

I mentioned to Ruland that over my half dozen visits over the past week, I’ve come to really appreciate his place and started to feel almost at home.

“I’m glad you feel welcome,” she replied. “And, you know, maybe you could be part of the Last Stop family.”

And just like that, a friendship was created. Bingo Bango.