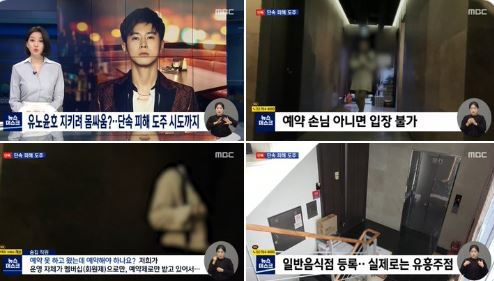 Reports claim that Kpop idol TVXQ’s Yunho flouted social distancing rules. He was caught drinking long after curfew at an illegal adult entertainment business with four other people. It is also said that there were physical altercations between the cops and his acquaintances. The latest reports claim that Yunho attempted to flee the police station while his acquaintances were talking to the cops.

After getting caught, Yunho reportedly personally apologized for breaking the rules. According to a report on MBC, Yunho was seen drinking until midnight at an adult entertainment company. Currently, the country has a curfew after 10 p.m. KST due to the pandemic. No restaurant or bar is supposed to be open after the specified time.

According to the MBC report, four people, including a company worker, were drinking with Yunho. The bar is located in Cheongdamdong. When the cops visited the place after 10 p.m., Yunho’s acquaintances began to use force and tried to prevent the cops from entering, to protect the singer’s identity. Yunho’s acquaintances are likely to be accused of obstructing justice.

MBC’s report also claimed that the company was registered as a general restaurant in Gangnam. But it was operating illegally as an adult entertainment business. The report said there was no notice board outside about the company operating on the fourth floor of a commercial building. Even the windows were opaque. It is said that the company did not accept anyone other than members and prior reservation was one of the conditions for obtaining entry. MBC obtained an entrance inside the company and revealed that several women and other employees had been seen inside the building.

Yuno issued a statement apologizing for violating social distancing rules. His statement read, “Hello, this is Jung Yunho. I am so sorry. I ended up disappointing everyone who trusted me and encouraged me. I am also sorry for the medical professionals who have worked hard during the COVID-19 pandemic, and all of you, who are getting through tiring days. “

“I am embarrassed that I met a friend and ended up chatting after curfew. I am angry with myself and can imagine how angry and hurt you must be as well,” wrote Yunho.