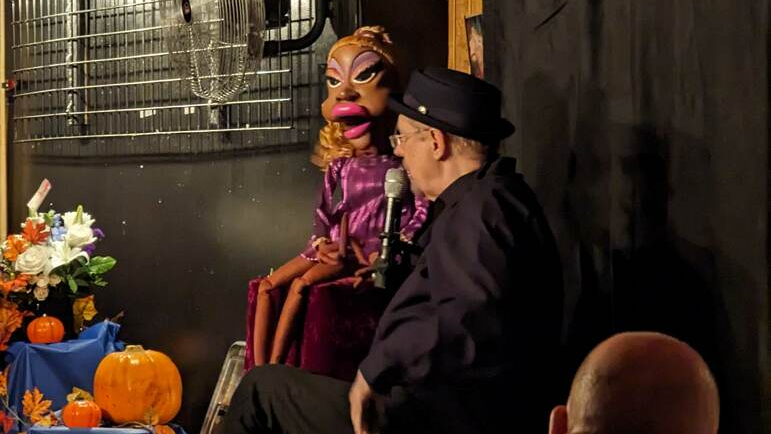 ROGERS PARK – The puppeteer who gave a racist performance involving a black puppet named ‘Sista Girl’ at Touché’s 45th birthday party has said he is retiring the character.

Puppeteer Jerry Halliday faced backlash for last week’s performance, in which he spoke for the puppet using a stereotypical “Blaccent,” or a voice that non-black performers use to mimic black vernacular, and told jokes about loving watermelon, being on welfare and having five kids.

On Sunday, Halliday told Block Club that he had removed Sista Girl from his number.

“I’ve definitely pulled the black puppet, just like the Rolling Stones recently pulled their song ‘Brown Sugar’ when they received similar criticism,” Halliday said. “I continue with my other puppets at full speed.”

Halliday, a national entertainer who made headlines in Las Vegas, said Sista Girl had been part of his act for two decades and he had never received backlash for the puppet.

“I’ve been doing my show for 20 years in front of thousands of people of all races to standing ovations and rave reviews from the press, then suddenly a handful of people in Touché attack me when the majority were enjoying my show,” Halliday said. “The one-sided attacks on my act have been greatly exaggerated and with many total fabrications.”

Parts of the performance, which led to several audience members walking out and a bartender quitting mid-shift, were shared in a video posted by audience member Philip Smith.

The video shows a confrontation between Halliday and a white onlooker, who tells the puppeteer “everyone in the crowd thinks it’s a little weird for 2022.”

Halliday, speaking through the puppet, replies, “Anyone who wants this man to shut up, make some noise [and] type.”

People can be heard clapping and booing the audience member, who leaves the bar shortly after.

At the end of the video, Halliday asks bar manager David Boyer to pass a tip bucket around to collect money for the five black puppet children.

Touché executives apologized for the performance. The bar will host a town hall for comment at 7 p.m. Wednesday at the Leather Archives & Museum, 6418 N. Greenview Ave.

“I hope people watch the establishment’s 45-year history in a tasteless 45-minute performance,” bar owner Chuck Rodocker previously said. “If there is anything we can do to support someone more in the future we would be more than happy to do so as we are one of the oldest gay bars in town and have always had a very diverse crowd that welcomes women, people of color, and people with disabilities.”

Halliday’s act has not been verified because he had been hired to perform at previous Touché events where he did well with the crowd, Rodocker said.

“We thought it would be fun to get an artist from the past to include him in the holiday party, but apparently his material hasn’t changed over the ages,” Rodocker said. “I wasn’t there, but from what I understand…people took offense to one of his black personas, and they just weren’t amused.”

In an email last week to Touché customers, Boyer said the bar would strive to be more inclusive for everyone.

“We have and will continue to work hard to make this space more welcoming to everyone, regardless of racial, ethnic, sexual or gender identity,” Boyer wrote. “Your feedback is noted and appreciated if we are to make it a reality here. We could not have stayed in business here for the past 45 years had it not been one of our primary business goals.”

The incident is the latest in a string of high-profile anti-Black incidents within Chicago’s LGBTQ community over the past few years. In 2020, one of the city’s top drag performers was dropped by Berlin Nightclub and Roscoe’s after black performers came forward with allegations of racism.

In 2019, protests took place following two racist incidents in Boystown. The first happened when Progress tried to implement a ban on rap music. That same weekend, vintage clothing and costume store Beatnix was discovered selling a Confederate flag vest, prompting former employees to come forward with allegations of racism against the owner.

Miguel Torres, a longtime Touché patron who won the 2014 Mr. Chicago Leather, a competition held by the bar, said he left after the audience member was booed.

“It was extremely disturbing and disgusting,” Torres said. “I just looked at my friend and said, ‘This is the first time I haven’t felt safe in this bar. Let’s go.'”

A group of people of color were standing outside the bar when Torres left, talking about what they had seen, he said.

“This bar is a safe space for many of us, from disadvantaged and marginalized communities, and that’s just outrageous,” Torres said. “I feel extremely disappointed and betrayed by this.”

Torres has worked with the bar for years to help its management make the space more inclusive, including ensuring its posters feature a diverse mix of people and posting signs that bigotry is not acceptable.

“I poured years of free community work into this bar, so this feels like a big slap in the face. You just ruined all that work overnight,” Torres said.

Click here to support Block Club with a tax-deductible donation.

Thank you for subscribing to Block Club Chicago, an independent, 501(c)(3), journalist-run newsroom. Every penny we make funds Chicago neighborhoods. Click here to support Block Club with a tax-deductible donation.