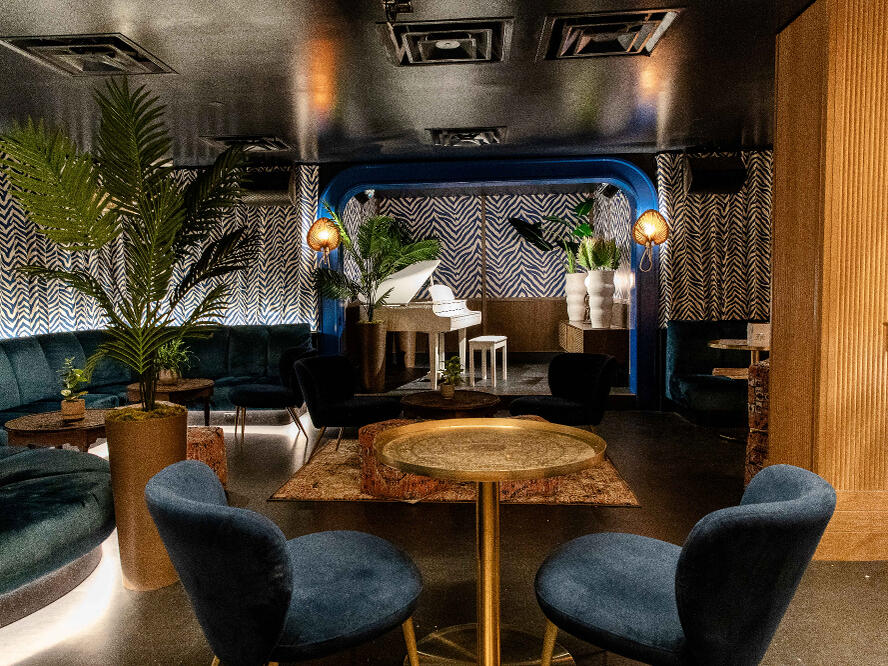 At Roc’s, 222 Clayton St., took over the space previously occupied by Five Nines, which opened in early 2022 but closed when the Clayton Members Club and Hotel partnered with Quality Branded to revamp its dining concepts and drinks. A grand piano replaced the burlesque stage in the clandestine space, and the cocktail lounge brings in local pianists to provide the soundtrack.

The mid-century living room, designed by AvroKo and Handwerk Art & Design, was inspired by a matchbook found in legendary El Morocco, which was a Manhattan nightclub and celebrity hot spot from the 1930s to 1950. The same blue and white zebra stripes that adorn the matchbook now wrap the bar in the form of eye-catching custom wallpaper. Curvy velvet banquettes and gold tables accent the space.

Quality Branded, a New York-based restaurant group behind Michelin-starred Don Angie and Chez Zou, recognized as one of Esquire’s best bars in America, is expanding its presence in Cherry Creek with the opening from Chez Roc. The restaurant group also operates Quality Italian in Cherry Creek North’s Halcyon Hotel. They also opened Cretans, a Mediterranean wine bar, and Kini’sa Greek restaurant, inside the Clayton.

Chez Roc’s cocktail menu was curated by Cherry Creek native Joey Smith, who is the bar manager at Chez Zou and Zou Zou’s in New York City. The menu includes spins on martinis, Gibson, Manhattan, Sazerac and other inventive cocktails like a Tamarind Sour with whiskey, tamarind, butter, lemon and cardamom.

Small bites include oysters and pistachios that are flambéed table side.

Promoter beaten, bar destroyed on video as Sabinus fails to show up for event, Skitmaker apologizes