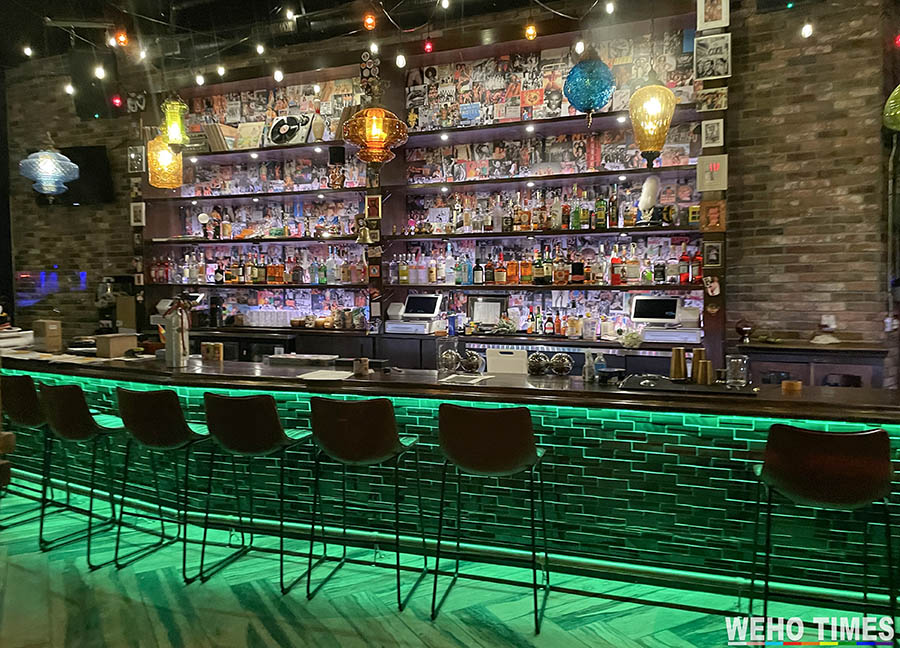 The owner says his new gay bar will open soon in the city of West Hollywood. According to Alcoholic Beverage Control (ABC), the bar at 8737 Santa Monica Boulevard (the former home of Gym Sporstbar), is under the trade name Dolly Shine, though the owners say they aren’t entirely committed to that name. . The latest update on the bar is that it could open as soon as two weeks, if municipal, health and other inspections allow.

Owner Jay Krymis, the man who also owns Fubar on the east side of Santa Monica Boulevard, confirmed to WEHO TIMES last December that the new bar was going to be “gay, gay, gay!”

A recent look inside last weekend shows the bar is nearing completion. The bar is fully stocked; there are plenty of artworks acknowledging LGBTQ+ history; there are sliding doors that will open the space to Santa Monica Boulevard; and the back wall of the bar is a collage full of magazine covers and press clippings paying homage to LGBT icons.

According to his wife, Michel Verdi Krymis, they had hoped to open for the WEHO PRIDE weekend, but too many loopholes, inspections and red tape continue to keep them closed. It was hoping to be open on the 4th of July, but that didn’t happen either.

Jay says they still have an inspection to do. He hopes he can welcome friends and family before a soft opening, and he says he can’t wait for the grand opening to arrive soon.

“This new space is going to be a cool and fun neighborhood bar,” he said. “It’s going to be a gay, gay, gay cool bar. I want it to be a laid back, super fun bar. It won’t be sporty or dirty, which I love about Fubar, but a great cocktail at an affordable price. Nothing high falutin. I want to make it look like it’s been there a long time and make it comfortable.

Comfort will be the main ingredient if their ABC liquor license has anything to say about it. The new space has a long list of operating restrictions:

Whether it’s called Dolly Shine as featured on ABC, or some other name, the new gay bar promises to open very soon in the city of West Hollywood. Stay tuned.