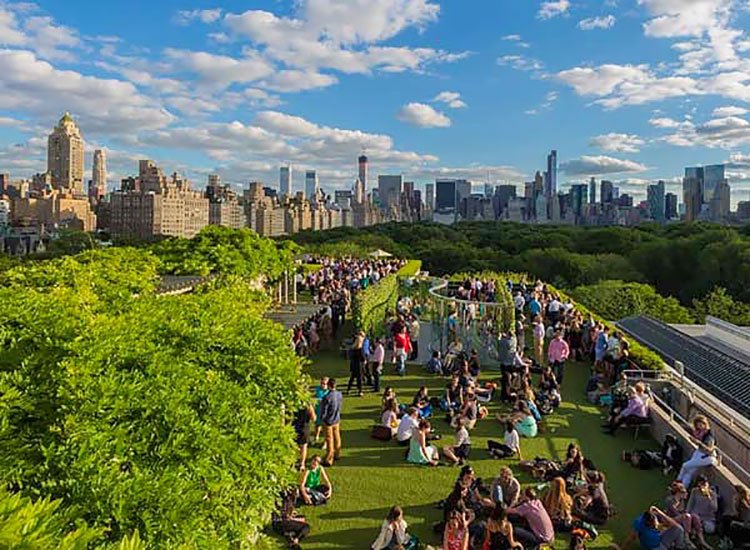 The Met’s Roof Garden will be transformed into a special electronic music venue on Fridays and Saturdays in the summer of 2022!

For Summer 2022 only, enjoy MetLiveArts’ first-ever concert series at the Met Roof Garden on Friday and Saturday nights, titled: Sunsets. This exciting weekly series replaces the usual Art Commission events (which will return in Spring 2023).

You can expect a diverse lineup of DJs from New York’s underground electronic music scene, such as Liondub, Kristin Barilli, Brooklyn-based DJ collective Uklon, Dominican-American DJ Toribio, and many more.

Cost: Free with admission to the Museum. Drinks and food are available for purchase.

A Detroit native and longtime Brooklyn resident, known for his original work and collaborations across all genres, including his work with Sia, Little Boots and Tricky.

A musical partnership and collaboration resulting in world-class house music.

A Brooklyn-based artist and passionate craftsman with releases on Soul Clap Records, Gator Boots, Nervous Records and his own eponymous label.

New York native, label owner and producer of reggae/dub/dancehall, hip-hop, jungle and afrobeat who has held residencies at The Box, Miss Lilly’s and, currently, Temple Bar.

New York native, drummer, producer and resident of ReSolute, one of the hottest traveling underground parties in the world.

The Brooklyn-based Ukrainian collective is dedicated to bringing the hardcore techno and bass sounds of Kyiv’s rave scene to New York City.

Barilli effortlessly weaves unexpected genres into her own sonic storybook and can be heard on The Lot Radio or live at Public Records in Brooklyn, where she serves as musical director.

Previously featured in MetLiveArts Sonic Cloisters series, Toribio is a Dominican from New York passing through Tampa and leader of the group Conclave.

A music enthusiast who encompasses elements of house and techno mixed with the soul of Detroit.

A resident of Good Room in Brooklyn bringing a mix of weird disco, funk rock and soulful house.

Tim ‘Journeyman’ Fielding is a Balearic School graduate and one of the key figures behind two of London’s most famous clubs of the 1990s: The Brain and The End.

This collective adheres to an age-old ethos that dates back to David Mancuso’s legendary downtown disco lounge, The Loft.

Born in Belize and raised in New York during the birth of hip-hop, MKL has a wide range of influences embedded in his art and a performance career spanning three decades.

Mayanja has been contributing to the world of electronic music for over 20 years as a performer, producer and record label executive with three imprints: Bumako Recordings, Sound Warrior and EDJ Records.

A native of Israel who arrived in New York in 2001, Elon has released dozens of records and remixes. He is a member of the ReSolute team, produced his own KOLEKTi event series and founded his own label, Balagan.

A rhythm-leaning aesthetic enthusiast born in the 1980s and raised in the 1990s whose raw house productions appear on his own Money Cat records.

Born in Queens, owner of Archivio Record Shop and resident of Public Records.

New York natives Brandon Weems and Craig Handfield are musicians whose desire to share their admiration and passion for the art form drives their community outreach. Since 2018, the duo have been hosting their own monthly event, “Coloring Lessons.”

Opening of a new bar and pizzeria at The Banks