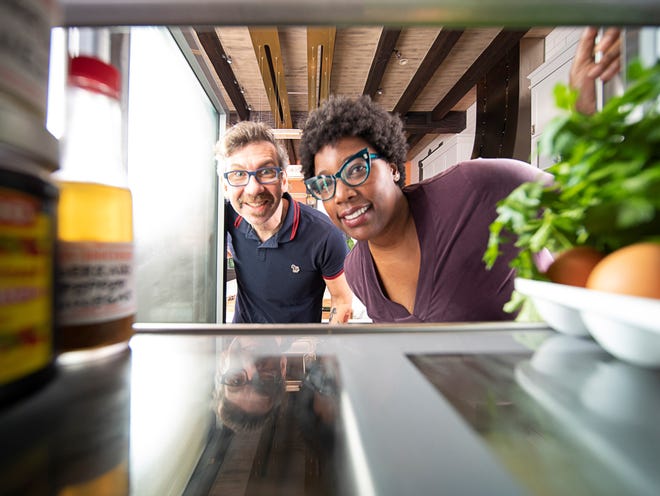 Chef Mashama Bailey and her business partner, Johno Morisano, wowed the foodie world in 2014 when they opened fine-dining restaurant The Gray in a converted Greyhound bus station in Savannah, Georgia.

The next few years would bring rave reviews from the national media and a James Beard Award for Best Southeast Chef for Bailey.

With their two new ventures, Diner Bar and Gray Market, both of which opened earlier this month in the Thompson Austin Hotel at 506 San Jacinto Blvd., the partners and longtime New Yorkers alumni are stepping out of Savannah for the first time in eight years.

The Diner Bar serves up a collection of some of The Grey’s greatest hits, serving up technical yet fun cuisine like foie gras and grits; seafood pudding; Carolina Gold shrimp and rice; and a lamb crepinette.

We spoke to “Chef’s Table” star Bailey and Morisano via video chat about entering a new market, translating Bailey’s “southern port town cuisine” to Texas, and what it means entering a culinary scene that needs more black culinary voices.

American-Statesman: Obviously, you didn’t pick Austin last week. When did the conversation start and what made you choose Austin as your first market outside of Savannah?

John Morrisano: We visited Austin and thought, “How does Savannah relate to Austin?” It’s not a different city. It’s not on the coast, but (it’s musical), and it’s art-oriented, and it’s a college town. It’s really similar. It was after we ate – I think that was really the thing, where we thought, “You know what? There’s a place for what we do in terms of style and technique of food and service for this place here.”

The culinary scene is exploding, and there are a lot of top restaurateurs and top chefs. But this simplicity that Mashama brings to the table, and the heritage and ancestral elements that she literally brings to the table, we thought there was a place for us here. … If we didn’t think we could contribute to the conversation, we wouldn’t have.

I don’t know if you’ve ever been here in the summer, Chief, but we don’t really have what they call “seasons” anywhere else, which can be exciting. We are obviously not a port city, even though most of our seafood comes from the Gulf. So how will the farms here, the seasons here, the sourcing here affect your menu and your approach to Southern cooking?

Mashama Bailey: We’re going to bring in some things that we’ve done very well, and we’re definitely going to use the Gulf. We already use goldfish, which we cannot use in Savannah. Primarily, my chef de cuisine here, Kristine Kittrell (of Weather Up and El Chile) has lived and cooked here for 24 years.

I think people who are familiar with the culinary scene here know that it has lived here for decades. How did you go about choosing it?

Bailey: She chose us. A friend of ours, Brian Chan, he helped us open The Grey. He moved to Austin during the pandemic. He met her, and he made the presentation.

We had a meeting with her and knew immediately that she was going to play an important role in all of this because she has such a wealth of knowledge and is so connected in this city. She makes it really comfortable for us to have conversations about what food is and where food should go. Having it as a resource is my secret weapon on how I’m going to match the menus (of both cities).

Plus, we have Natalie Gazaui (from Comedor and MML Hospitality) as Executive Pastry Chef, so our team of chefs is pretty stacked here, and they know this city inside and out.

Le Gray is so distinct – the building, the design, the styling, it really informs the experience there, and it feels so essential to the whole experience. Now that you’re translating the restaurant into a new space, with new ingredients in a new state, how do you try to make it look new while keeping what you had in the past?

Morrisano: A long time ago, Mashama and I decided that we weren’t going to deal with bus stations. It’s funny; once we started getting media attention, people were calling me. I got an email this morning from someone who has a bus terminal in Jackson, and he said you should come save this thing. Gray is Gray. It’s hard to even meet people’s expectations in this building, because people have formed their own ideas of what an experience will be like. We just try every day to live up to them. We knew when we came out of Savannah it wouldn’t be with “The Grey.” It’s just too busy. It’s too hard. I think we would fail if we opened a Gray somewhere else.

Bailey: And then having Kristine and Natalie bring their own experiences and lifelong connections to Austin (is one of them). Natalie’s love for South and Central America (cooking) and (how) it all contributes to food in America – wow. We can kind of take our foundation and bring these very additive people with us and change everything.

Chef, there’s kind of an embarrassing lack of black chefs in Austin. Do you know that coming to town, and is there a sense of pride in bringing traditional southern food, port food, black food to a town that has so little representation in that area ?

Bailey: I take great pride in it. I think representation matters. I think we’ll start to see more young black chefs who are in town gravitating towards what we do or hopefully even want to work with us. I think black food is American food, and I think it’s so intertwined and so nuanced. I think I have a real opportunity to explore that in a very healthy and broad way, and I don’t think a lot of black leaders can do that.

You can probably count on one hand, or on one finger, the number of out-of-town chefs who have come to Austin and been very successful, not because the streets are littered with failures, but because that a lot of people don’t try this.

Morrisano: Thanks, Matthew. Alright, I have to go.

Do you know what the scene looks like? Is there excitement, intimidation?

Morrisano: I go back to when we made decisions. We came here and ate with enthusiasm. We’ve met with chefs, and we’ve met with general managers, and almost (asked), “Do you think there’s a place for us? Do you think we can add to the conversation?” The welcome was really warm. We don’t come here to do anything other than be part of the community and the food community.

Bailey: I’m not going to face it: I was intimidated coming to Austin. It’s a small big city, and there’s a lot of great food here. The first visit was like, “Do we belong here? Do we belong here?” And I think about what Johno says, you start thinking about what you’re bringing to the table. It’s not to be better than, it’s just to really express yourself fully.

I think we can do that here in a really fun way, and we offer things that are very true to who we are. That’s all we came here to do: be true to who we are, serve delicious food and try to feed some people and have a good time while we do it.