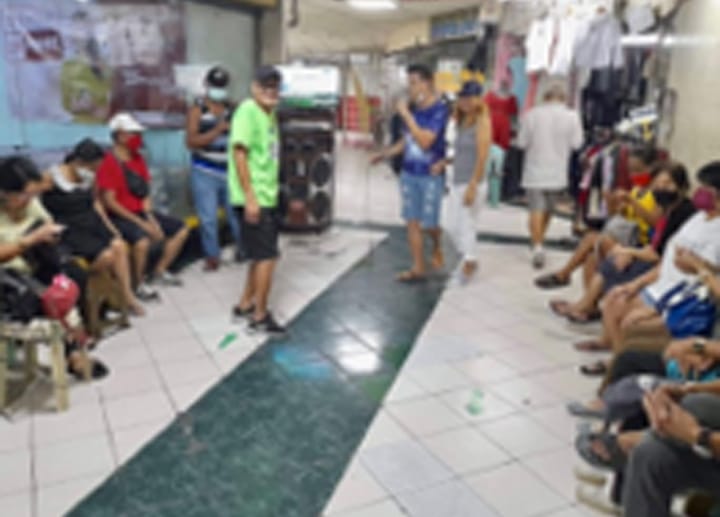 “Lolo” caught in a video bar

Where do the seniors go while waiting for the last bell? What do they face at the final curtain? I know where some of them are going. They gather at a videoke bar in a mall somewhere in Mandaluyong City to sing their hearts out.

Remember that popular song about Annie Batungbakal, retail saleswoman by day and disco queen by night? These people live a sort of double life: Frank Sinatra or Martin Nievera during the day, Tatay Berto at night, Peggy Lee or Sarah Geronimo in the morning, Lola Vina in the afternoon.

Every day, seven days a week, patrons aged 50 to 70 come here, write their names, then sit on the chairs, patiently waiting their turn to go to the center of the room, hold the microphone and sing the songs they had pre-selected, P5 for each song.

It’s a videoke bar but no food or drink is served here; just a spacious room, practically bare, with nothing but plastic chairs on either side of the room and a single screen and videoke player in the front center. There’s an Anita Bryant song called “My little corner of the world.” That’s it, a singing club for seniors in a small corner of the world.

Much like the scene in Lloyd-Webber’s musical “Phantom of the Opera” where the mysterious masked impresario repeatedly commands the young diva to sing to the highest note, it seems to me that something or someone d’invisible pushes each of these old people to come under the spotlight to sing at the top of their voices, to lose themselves in the fervor of the moment. They may be singers, but they’re no longer young and there’s not really a spotlight except in their minds.

What is it about videoke singing that makes these people come to this place day after day rather than staying home, watching TV, cooking meals, fixing the leaky roof or even to make a living?

Singing is like an elixir they crave and their daily journeys here bring out the other personality which somehow brings their respective daydreams and fantasies to fruition. Even I, who am jaded about these things, can see that once the next performer starts singing, their self becomes fully invested in it.

We all know, of course, that music has the power to evoke an emotional response within us, but this is even more so with the act of performing music such as singing. It is said to release happy hormones called endorphins. That’s why it feels so good to sing. In this one corner of the universe, the performer is able to disconnect from the news and let the endorphins flow.

Videoke singing can also be therapeutic and restorative with the release of endorphins in the body. And there is no pressure. No one gets booed here for an atrocious chant. No Simon Cowell to critique a performance. Each artist is duly applauded. After all, this is not a talent contest. At the end of the day, each of these older artists likely goes home happier, more relaxed, and friendlier.

Beyond self, there is the palpable sense of community. This is because it is a focal point, akin to the “tindahan sa kanto” or the large tree in the village square and even a second home for some. Here, they make new friends or sometimes a new lover, as an old lady shamelessly admitted to me.

One is between friends that everyone is comfortable with so they can say things they can’t say at home. They talk freely about their present and their past and find an attentive ear to their current concerns and even to their banter. Older people are only too willing to tell their stories to anyone who will listen.

Of course, songs play an important role in building camaraderie. Many selected songs that they know well will also resonate in the room. The emotional connection to these songs is what keeps those in attendance engaged.

Choosing a song can sometimes be eye-opening, like when a woman over 60 had tears in her eyes as she sang ABBA’s “The Winner Takes It All.” I’m sure there’s a story we don’t know. Truth be told, this place is a treasure trove of colorful and insightful stories that can be tapped into by any discerning writer.

I’m sure there’s a lot of history too, because these old people embody a past that is fading away. Come to think of it, this piece represents a particular subculture that will pique the interest of any sociology major looking for a topic for their university thesis.

Seriously, in addition to building more homes for seniors, we should open more of these types of video corners for seniors across the city. It would be a great space for rejuvenation and healing, even for older people who don’t like to sing.

Later, I realized that no one was singing the inevitable “My Way” background video. Was it because no one wanted to utter words like “the end is near and I’m facing the final curtain?” Naturally. It would probably have dampened the bubbling mood in the room.

Maybe choosing not to sing this song is a statement.

All their lives so far, many of them have not been able to rise to the limelight or be the center of attention. For people who don’t have the opportunity to express themselves properly on a regular basis, singing in front of strangers in a room full of people may be the best thing to do. an exciting way to own their individual voices. In the pre-departure living room of their lives, they prefer to sing passionately so as not to be forgotten too soon.

I’m still here. My microphone. My song. My life.