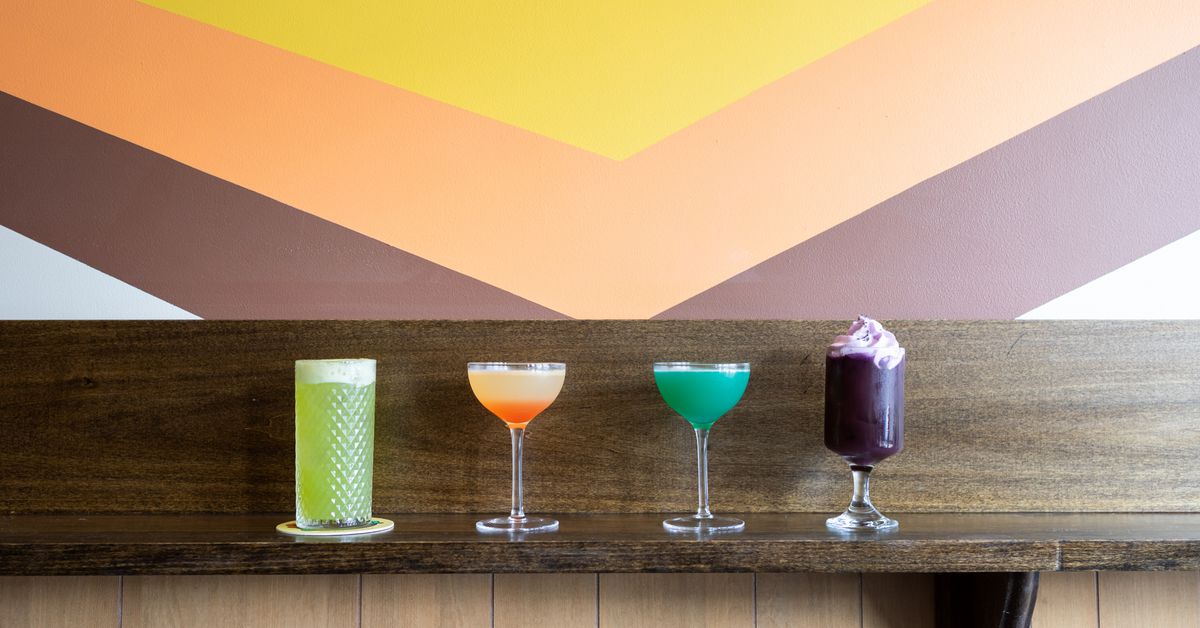 Inside For The Record, San Francisco’s retro-fabulous cocktail bar and restaurant opens in the marina

With sincere apologies to the Merchants at the Marina, the neighborhood’s newest cocktail destination can’t make Red Bull vodka and won’t play any of today’s biggest hits – not even Justin Bieber, we already have it asked. Instead, you can get a carefully crafted cocktail or respectable classic drink, to be enjoyed with a healthy dose of soul, funk and disco. That’s because For the Record, which opens today and celebrates its grand opening on Thursday, May 19, is committed to cultivating the retro vibe of San Francisco’s craziest neighborhoods. That 70s show dreams, from the wood paneling on the walls to the shimmering disco balls hanging from the ceilings.

Walsh brings a lot of experience to his first project; he’s a longtime employee of Future Bars, the prolific San Francisco group behind nightlife destinations like Bourbon & Branch and Pagan Idol. And he hired another Future Bars alum to work on the cocktail menu. After a stint as a bar manager for Liholiho Yacht Club and Good Good Culture Club, Janice Bailon has already spent time behind the stick at Bourbon & Branch and Devil’s Acre and put together a full album of hits for For The Record. Each drink on the 10 list is inspired by a different song from the late ’60s to mid-’80s — each song serves as a starting point for the drink’s flavor profile, she explains.

Take for example the eye-catching azure Superfly, named after James Mayfield’s 1972 soul classic, made with smoky mezcal balanced by lemon, passion fruit and a touch of herbal Galliano liqueur. The California Soul channels the vibe of driving on Highway 1 on a summer day by blasting Marlena Shaw, which in cocktail form tastes something like vodka with crisp, floral Lillet Blanc and honey . A bubbly float and a splash of Campari give the drink a layered look similar to a California sunset.

With The Superstitious – a Stevie Wonder funk anthem transformed into a drinkable form via aged rum, homemade ube orgeat, coconut and coffee – Bailon gets a little personal: Not only was the song favorite when she sang with the band at North Beach’s Tupelo, but ube is also a nostalgic flavor for Bailon, who is Filipino American. “It’s part of my childhood, so I like to incorporate that into what I do,” she says.

There is a respectable back bar for the staff to work on, so yes you can also come in and order a gin and tonic. But if you’re trying to take things up a notch, don’t be surprised if the staff steer you away from forehands in favor of one of their Cheekies – so named because the mini cocktails are “just enough to fill your cheek.” ,” explains Bailon. The disarmingly sweet Lowrider blends tequila and sweet herbal Cardamaro, while the smoky Bad Girls combines mezcal and bittersweet Brucato Amaro. “The second you have it, you you say ‘Oh, we’re in trouble,'” Bailon jokes. And for non-spirit drinkers, there are bottled or canned beers and a selection of wines available.

For The Record’s menu is certainly concise, but it’s backed by the creativity of consulting chef Frank Hua, known for his Hawaiian-inspired pop-up Unco Frank’s. Hua says he started researching the food of the time, but came across recipes for marshmallow and jello salads and pineapple chicken. “Foods you don’t want to eat,” he says. “So I took a different approach.” Hua leaned on the idea of ​​a retro diner but upped the usual appetizers: deviled eggs are topped with smoked trout roe and coconut prawns come with a side of coconut mayo. There are also simple and solid dining options, including a Caesar salad, fries, and porcini mushroom popcorn topped with white cheddar dust and browned butter.

Walsh says he had been looking for the right space to get away on his own for some time. He moved into the low-ceilinged ground floor space that once housed Mina Test Kitchen (and more recently, U Dessert Story) and has spent the past four months transforming the cramped room into a cozy bar hybrid. -meet-conversation pit. Benicia’s groovy patterned wallpaper by Bradbury & Bradbury envelops the long, narrow main room, with a wall of green banquettes arranged on high tables with plenty of room to stand and sip a drink.

Walsh also brought in a handful of local talent to fill the space. Design consultant Britt Henze painted a striped mural that strikes, like lightning, around the space. Design consultant Ivan Mora has hung a disco ball installation in the back room, and there’s a hand-painted sign hanging in front by Fernando Garcia. Even small touches speak to the retro-fabulous theme: a row of glowing lava lamps, a vintage radio cabinet, and framed artwork emblazoned with psychedelic Bill Graham fonts. “I love history and when I looked at San Francisco history, there was so much about that era,” Walsh says. “But there’s no bar that leans into it as much as we do.”

The Colombian gaming industry continues to raise the bar for success

This sports bar only shows women’s sports on its TVs