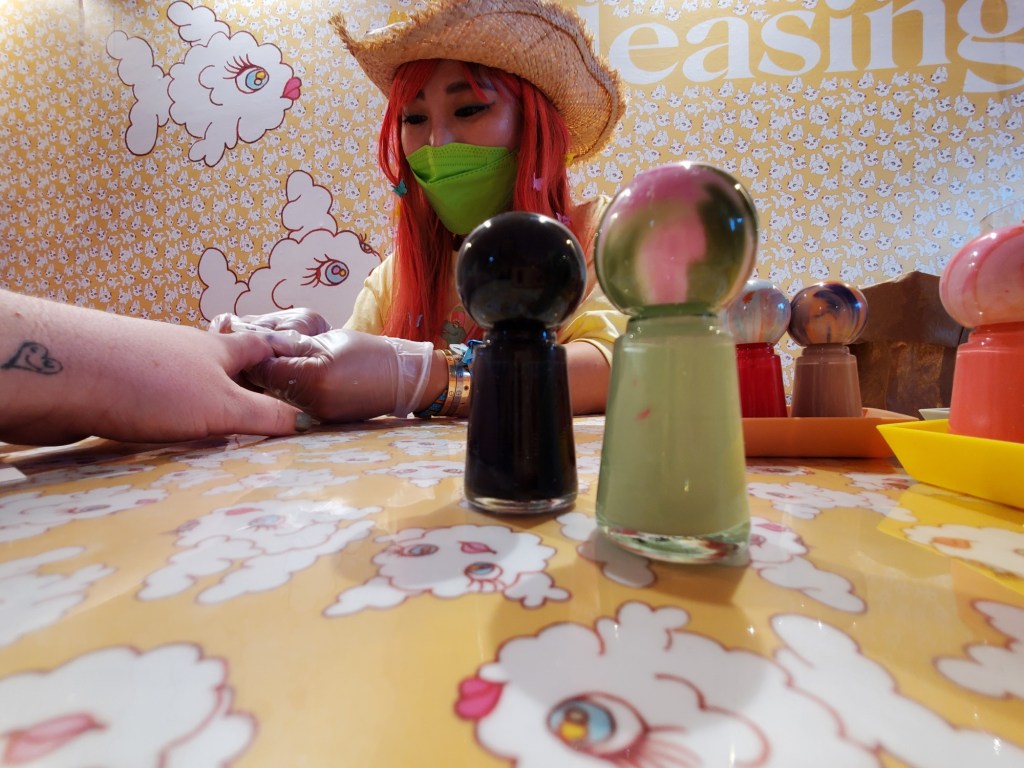 Pop star Harry Styles headlined the first night of the three-day Coachella Valley Music & Arts festival in Indio on Friday, April 15, but he will be giving his fans free manicures on all three days over both weekends of the festival.

Styles’ clothing, skincare and nail polish company Pleasing made its festival debut at Coachella with a pop-up polish bar experience that offered free simple manicures to customers in a colorful, psychedelic space tucked away in the festival courtyard, not far from the Coachella main stage.

Dozens of fans lined up for a handful of nail artists to paint on one of Styles’ new polish colors with names like Sprouting (pale green), Tender Bud (mushroom beige), Vine Ripe (opaque red), Inky Pearl (black) or Perfect Pearl (white with a glossy finish). Four-piece polish sets in small bottles with marble caps are sold on-site (The Shroom Bloom and Perfect Pearl sets) for $67 each.

Sign up for our Festival Pass newsletter. Whether you’re a Coachella lifer or prefer to watch from afar, get weekly dispatches during Southern California’s music festival season. Subscribe here.

Get a free @Harry Styles @Pleasant Mani to @coachella. What color will Harry be wearing tonight? pic.twitter.com/a97nxvjmsy

Los Angeles-based nail artist Britney Tokyo was among the manicurists working inside the pop-up. She painted the fruits and flowers on Styles’ fingernails, which he sported during a performance at The Forum in Inglewood in 2019 in support of his second album, “Fine Line.” Complimentary manicures included a choice of nail polish and/or a selection of nail stickers which were applied and set with a clear coat with a touch of shimmer.

Fans could also purchase Coachella-exclusive Pleasing merchandise, including oversized hoodies for $110 and bandanas for $20.