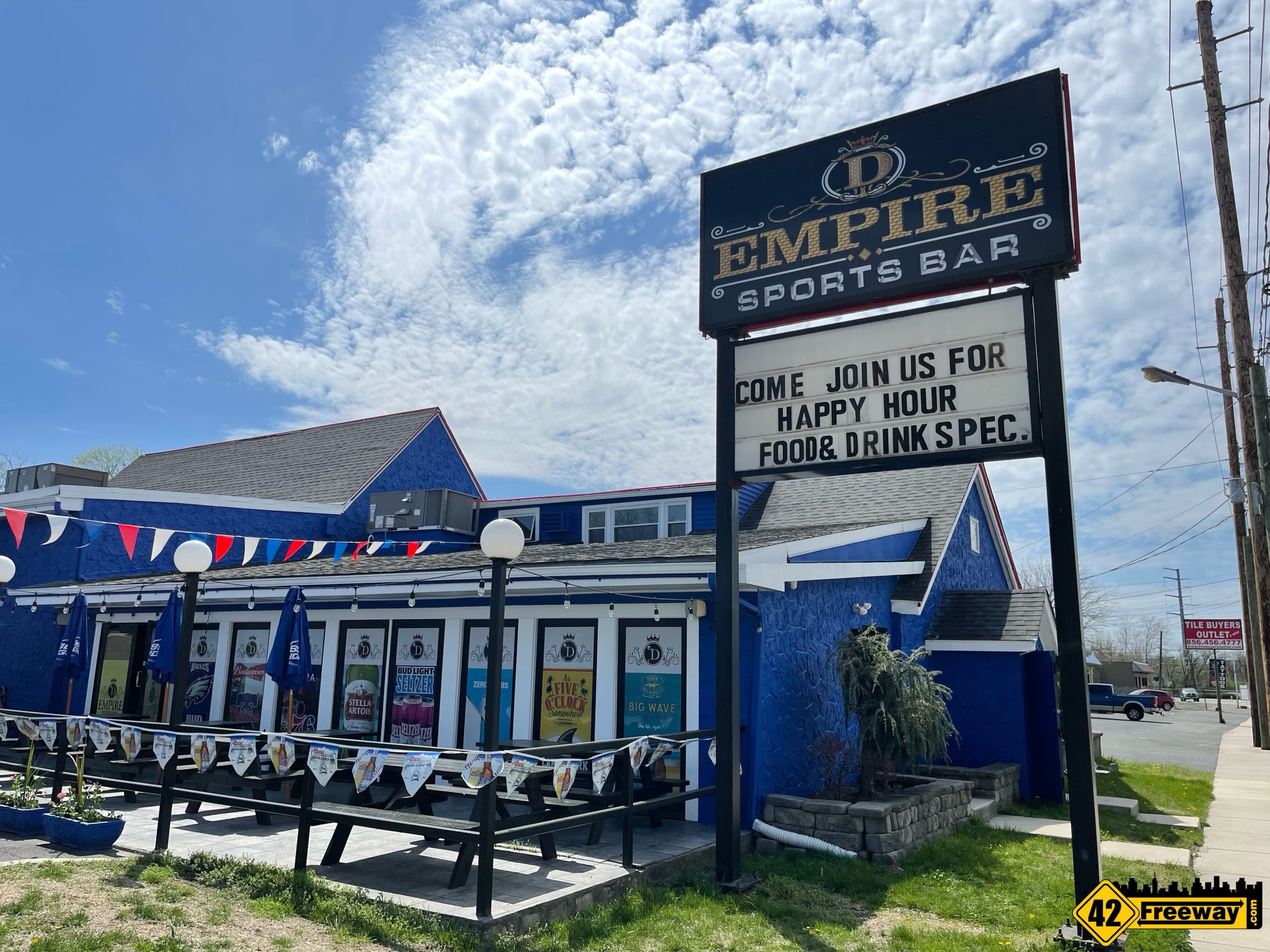 The Empire Sports Bar opens today Monday, April 18 in Brooklawn NJ, in the location that used to be Clancy’s Pub.

The new owner of the Sports Bar property owns another business nearby, the Empire Diner. Owner Dervis took over the property and refreshed the whole space, changed a few things…and yes, he has all new TVs in the Sports Bar‘s signature TV wall!

Although the property stays true to its sports bar roots, the new owner has changed the lower level to include a dedicated dance floor area, lighting system and impressive sound system!

I mean, it’s not like people watch sports at midnight!

Read on for more details and pre-opening photos of Empire Sports Bar upgrades! The biggest changes are on the lower level.

Empire Sports Bar is located at 304 Rt 130 in Brooklawn NJ at the intersection of Old Salem Rd (which is now a signalized intersection).

For many years the place was known as Clancy’s Pub, and long before that we old folks will remember the building as Wayne’s Log Cabin in the front and J’Antonio’s restaurant in the front. ‘back.

So, in November 2021, we wrote about Empire Diner taking over ownership of the bar and offered some hints about the initial plans to upgrade and reopen the bar.

I think everyone would agree that Clancy’s earlier remodel still had “good bones” with its two-section approach of a bar on the upper level and a restaurant on the lower level.

The building just needed a little love and some new innovative ideas to give customers even more reason to come back!

Well first of all, everything inside and out has been patched and repainted. A distinct blue paint now adorns the exterior, and inside all the walls have been repainted…and some clever changes have been made to the layout, particularly on the lower level.

The layout of the upper level of the restaurant remains virtually unchanged… which is a good thing as I have always found the layout to work really well.

Did I mention I was in a cover band years ago and played at this bar?! 🙂

The first thing everyone remembers about the bar is the TV wall.

Yes, the TV wall is still there, and YES, it now has all new HDTVs!

The cutout area for the projection screen also remains, and even the projector has been upgraded.

In fact, we’re told the projector has electronics behind it that allow it to project DJ-driven music videos, internet sites like Youtube, and more.

The bar offers 16 beers on tap, and knowing that bourbons/whiskeys are very popular at the moment… we took care to offer a very good selection at the bar!

The biggest changes have taken place at the lower level.

What immediately catches your eye in the first place when you enter on the lower level (near the entrance) is the large open dance floor!

The dance floor runs along the wall of windows (facing the patio) and is probably about 1/3 of the lower level.

This dance area has new flooring that helps clearly define the space.

Dance lighting has been added…as well as an impressive sound system. During our weekend visit, we were able to experience the PA system out loud. We could hear and FEEL the power!

And in the far corner of the dance floor is a dedicated sound booth, where Dervis has set up a mixer and DJ.

The rest of the room includes several high tables on the ground floor, and booths remain around the boundary walls.

Another change for the lower level is a second service bar in the rear inside corner.

With the placement of the dance floor and DJ booth on the lower level, it’s clear that Dervis wants this section to be a fun hangout area…and to him, it was just awkward for servers or customers to having to go up and down to the main bar.

Thus, the second bar on the lower level will allow waiters and customers to have better service for a wide variety of drinks and beers.

This is a great idea and clever placement for the bar, which required replacing a wall or two to redirect the entrance to the restroom.

Sports Bar and Dance. Although a common design for bars for over 50 years, the Empire Sports bar may have one of the best configurations in every category!

And many will ask “Will there be live bands?” “. We’re told yes…but maybe once a month, and he’s not ready to move on yet.

So perhaps the biggest change at the lower level is more inferred from what we’re showing here. While Clancy’s Pub used this space as a quieter restaurant, Empire Sports Bar is looking to turn it into a fun and lively space with a dance floor, DJ sound system and its own service bar!

Which brings us to the food!

Everyone wonders that since they also own the Empire Diner near the circle, what are the plans for the Empire Sports Bar?

Incredibly delicious variations of dishes you would normally expect from a sports bar.

But you won’t find the dinner menu they have at the nearby Empire Diner at Brooklawn Circle.

Simply, if you’re looking for that full dinner menu experience… the Empire Diner is your best option to start. Then go to the Sports Bar for a drink! But the Empire Sports Bar will also offer amazing dining options!

In our original article last fall, we shared that Dervis was considering adding a second floor to the building for a dance area, but he has since changed his mind about it and taken that dream to this lower level. .

With the building sitting on busy Route 130, it becomes an advertisement in itself!

And the Empire Sports Bar features a bold blue exterior paint that looks great and absolutely captures the attention of anyone passing by!

During our conversation, we learned that Dervis is proud to be in America after having found such success in a little dozen years here… so he chose his color scheme to celebrate the United States!

The Empire Sports Bar also has an outdoor patio located just outside the dance floor along the wall of glass doors.

As expected, the team spent considerable time on maintenance items inside and out. With the bar closed for several months, it made sense to ‘knock it all down’ so it would be ahead of maintenance items for a long time.

Although there is no second floor, there are other ideas for the property that he shared with us.

Dean Crowe’s bar will become the backdrop of Ulysses!