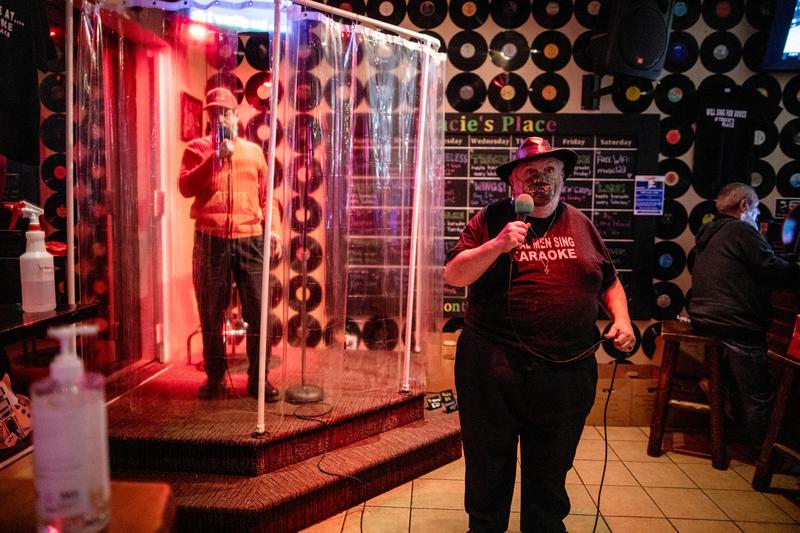 Tracie’s Place Karaoke Bar and Restaurant in Hamilton, Ont., 70 km south of Toronto, closed during the COVID-19 pandemic in March. It reopened three months ago amid strict protocols established by the government on how they might operate.

The province of Ontario ordered most businesses to close in March, reopening in stages from June. Karaoke bars were among the last businesses allowed to reopen, due to the possibility of spreading the virus through droplets through singing.

Owner Tracie England’s solution? Installation of a cubicle made of transparent plastic shower curtains on stage.

“Doing it in the shower is a great way to stay sanitized and keep everything clean,” she said.

Normally she has to rush people because there is a great demand to go behind the microphone. Now she plays a song between each singer, which gives her a chance to clean the shower stall. Shower curtains also separate the tables.

“Everything has been fabulous so far,” England said.

The change seems to be going well with customers so far. On a recent Friday night, Tracie’s Place was at full capacity.

“It’s a fun little quirk that adds to the place,” said boss Michaela Hallok, 21. “(England) cares so much about the people who come to this bar that she wouldn’t risk putting anyone in danger.”

Ontario, along with much of Canada, has seen increased cases in recent weeks. The province reported 566 new cases of COVID-19 on Sunday, according to the provincial government.

Reporting by Carlos Osorio in Hamilton; Writing by Moira Warburton in Vancouver; Editing by Daniel Wallis