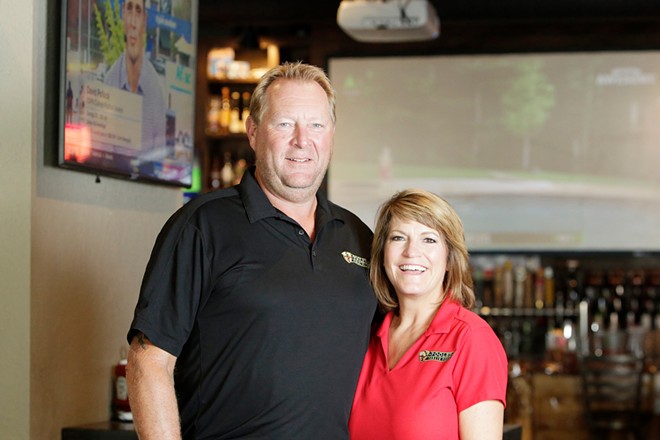 Good times are a family affair at Poole’s Public House.

With my apologies to a certain Italian channel, when you are at Poole’s Public House, you are Actually family.

When Scott and Lisa Poole’s husband-and-wife team opened the sports bar in a shopping center on East Hastings Road in 2013, they weren’t seasoned restaurateurs trying to reinvent the wheel.

Poole’s motto is simple: “We don’t serve fast food, we serve good food as fast as we can.”

“We value people and make them feel at home when they’re here,” says Scott.

And that sense of community is palpable when you step into one of Poole’s two locations: a newer flagship location built on the same block as their mall in North Spokane and a second location on South Hill. While the bar is often packed during Big Sky football games (the Poole family has a long line of University of Montana alumni, so it’s a hot spot in the Griz game), Gonzaga Hoops games and NFL Sundays, even the weekday lunch scene, has a great vibe.

This is partly down to the quality of the food and drink. With 18 beers on tap (many local) and a menu of elevated sports pub fare, there’s something to satisfy most tastes. The half-pound burgers are delicious stomach dishes, and other items have been changed to classic preparation to maximize flavor. Scott even goes so far as to sample the chili and clam chowder each time he visits the restaurant to ensure consistency is maintained.

The other key element to Poole’s success is the neighborhood gathering place the family has fostered. Poole’s three sons have worked in restaurants and more recently have taken on most ownership duties: North Spokane (Trevor), South Hill (Tyler) and the family’s recently opened Italian restaurant Mossuto’s (Tony).

“It’s like a Cheers kind of place,” Lisa says. “Our kids know everybody, they know what everybody’s drinking – half the time they have it on the table before they sit down, you know?

This loyal customer base has helped Poole’s weather the tough times of the pandemic. And now that their kids have taken over the reins, Scott and Lisa can soak up that vibe as customers.

“Now we become guests when we walk in,” says Scott. “I’ll still go into the kitchen and try the chowder, though.”