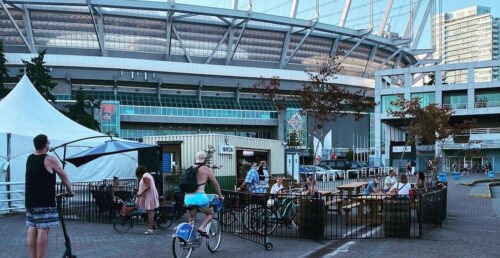 Batch on Plaza: a pop-up container bar in the Plaza of Nations

Vancouver is an ever-changing city, with near-constant construction sites, disused buildings and iconic old establishments that end up standing empty during times of transition.

The Plaza of Nations site – the former site of the British Columbia Pavilion from Expo ’86 at 750 Pacific Boulevard – has been left virtually empty until redevelopment begins, but now some businessmen savvy saw the opportunity to use the space during this transitional period.

Just as the City Center Motor Hotel became pop-up artists’ studios for the years it would take for its redevelopment to begin, the Plaza of Nations site is now home to a pop-up bar.

Batch on Plaza, which just opened last week, is a pop-up bar concept housed in a shipping container.

The temporary bar sits in the shadow of Rogers Arena, conveniently located just off the False Creek Seawall for a mid-bike or walking drink break.

The bar has no indoor seating, of course, but instead has a few picnic tables and umbrellas set up for the season.

Batch also has a rotating roster of food trucks that stop by to serve satisfying local fare, including breakfast and coffee from Crack On and plant-based hot dogs from Good Dogs.