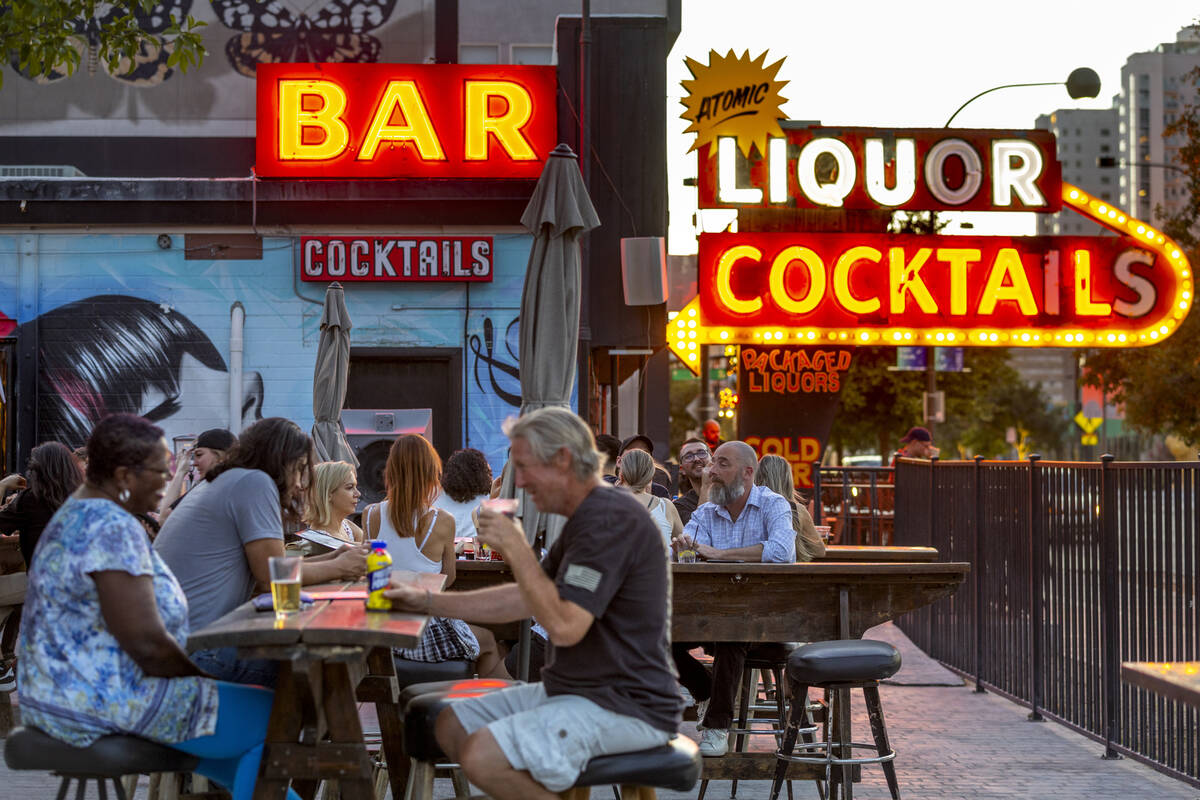 It was a historic occasion at Atomic Liquors, as Las Vegas’ oldest independent bar turned 70.

Atomic Liquors has been a fixture on East Fremont Street since the original owners — the late Stella and Joe Sobchik — opened in 1952, according to company records. They already operated a cafe, which they turned into a liquor store. Then they bought a pouring license in an old hotel lounge. The result? Atomic Liquors became the city’s first tavern, a place where alcoholic beverages could be served and sold beyond hotel-casino boundaries under a distinctive license: #00001.

In its 1960s heyday, Atomic attracted a working-class clientele and was known to attract celebrities such as the Rat Pack, Barbara Streisand, the Smothers Brothers and Clint Eastwood in the late-night hours after casino shows. Like much of downtown Las Vegas, the neighborhood surrounding Atomic suffered from the 1970s through the 2010s.

In 2012, a group of investors led by downtown lawyer Lance Johns bought Atomic from Sobchik’s son, Ron, and remodeled and revitalized it after the place had been closed for a while. .

Atomic Liquors is the epitome of a cool, moody local lounge — though it has global stature among fans of dive bars, Las Vegas history, retro design, and even mixology.

Some guests have been visiting Atomic Liquors for more than a decade, like Wesley Davis, who finally joined the team as head of security eight years ago.

“I used to walk in and drink, and I had just quit my job at Zappos – I did new hire training there for a while – and I needed a change of direction. pace,” Davis said.

He contacted a manager. “Would you like to hire a guy who can talk about the pants of a unicorn who doesn’t need pants?” Davis asked. His response: “You have an interview tomorrow,” he recalls.

“The whole company has always taken good care of me,” Davis added.

While overseeing security at Atomic Liquors, Davis has seen a lot in his time, but he has some welcome words for Southern Nevadans (and tourists) unfamiliar with this part of town.

“I tell everyone the same thing: it’s like any downtown in any big city – there will be characters on the streets, cool places and quirky joints. Acme Security and the police – Metro – do a very good job of keeping everything guarded. It’s not scary; it’s right downtown,” Davis said.

Jessica Balding has been in atomic liquor orbit for about four years, finding her after moving here from New Mexico for a military contract position at Nellis Air Force Base (she remotely assists jet fighters in action). She arrived in 2018, explored the city and found Atomic. “But I wasn’t quite a regular,” she added.

“Then in 2019 I had the opportunity to move here, so Atomic is kind of my home bar,” she said. “I like that it’s close to my house so I can walk here.”

Balding says spending time at Atomic Liquors allowed him to form friendships with people from many Las Vegas communities beyond the military. And she made tourist friends – travelers from other places who visited the bar many times. (“‘So good to see you again. What’s going on in Austin or Tulsa?'” Balding demonstrated. “Or wherever they’re from. That’s really cool.”)

A growing fan base

And Atomic Liquors continues to grow its fervent fan base and local crowd, most recently with Kevin Buchholz, a recently retired police officer from South Florida.

Four months ago, Buchholz and his wife, Liz, moved into a new condo tower next to Atomic Liquors. The bar was an essential part of the couple’s house-hunting method.

“I googled the bar and found some of its history,” he said, noting the modern but retro bathrooms. He also loves that the bar can be seen in “Casino”, one of his favorite movies. “I just love the story. That’s what drew me in.”

As a bonus, Buchholz has found Atomic Liquors handy when Liz – who has a home business – is busy, as it can easily slide in next door and give her room to work.