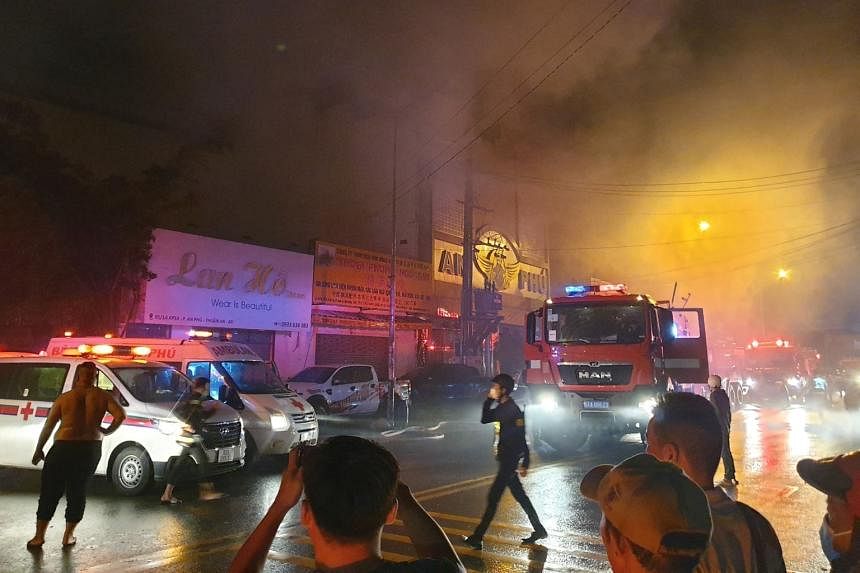 HANOI – The death toll of a fire that ravaged a karaoke bar in the south Vietnam has risen to 23, an official said on Wednesday.

The fire engulfed the second floor of the building on Tuesday night, trapping customers and staff as dense smoke filled the staircase and blocked the fire escape, according to reports.

Many huddled on a balcony to escape the flames, which grew rapidly as they caught the wooden interior, while others were forced to jump from the building, state media added.

Photos showed plumes of smoke billowing from the bar – located in a crowded residential area of ​​Thuan An town, north of the commercial center of Ho Chi Minh City in Binh Duong province – as firefighters on cranes were trying to put out the fire.

“We are still looking for other victims but the toll so far is 23 dead and 11 injured,” Mai Hung Dung, a senior Communist Party official in Binh Duong, told AFP.

Authorities had previously put the death toll at 12.

The root cause of the the fire was believed to be an electrical short circuit, state media reported, citing a report by Binh Duong authorities.

Eyewitness Nguyen Sang, who lives near the karaoke bar, told the VnExpress news site that when fire engines arrived at the scene, a receptionist said there were 40 people trapped inside.

“Many people ran outside through the main entrance, but many more couldn’t stand the heat and jumped out, breaking their hands and legs,” Sang said.

Rescuers searched throughout the night for anyone trapped in the 30-room bar, according to state media.

Police said the karaoke facility Fire prevention regulations had been checked before the fire, he added.

In what was before Vietnam’s deadliest fire, 13 people died in a fire in 2018 at an apartment complex in Ho Chi Minh City.

In 2016, a fire at a karaoke bar in the capital Hanoi killed 13 people, prompting a nationwide assessment of fire prevention measures in bars and clubs.

Last month, three firefighters died after trying to put out a fire at another karaoke bar in Hanoi. AFP